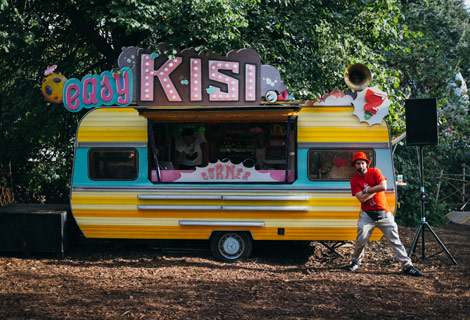 For the Dockville we planned…let´s say, a mini Corner-Festival – the easyKISI. The neologism consists of the parts kiosk and camping. Both are well suited as a meeting place and each in itself a microcosm. The caravan as such is the festival of life, combined with urban standing culture, art, music, and a tiny pinch of smugness he opened a whole new way of gathering. We built a caravan, which was mobile at various locations on the grounds Dockville as a small venue used. The caravan serves as many recordable area and should be used in addition to the possibility of a bar, as a DJ console or grill station.

After a few joyful but also exhausting weeks we remain with a very comforting and very satisfied feeling. What we made, we have implemented without major setbacks. The caravan was to easyKISI and visitors to dance-crazy party animals. Each event was a blast and there were many hand positive feedback. In this sense, once again respect to the entire team and the corner, you are Sunnies!